Ceylon (Sri Lanka) is known to have received its Independence from the British Rule on the 4th of February 1948. Behind the story of independence, lies a lot of national heroes who have contributed till the day. The struggle began not just a couple of years before 1948, but much more before that…

1848 the year of revolutions across Europe! Like elsewhere… It happened in Ceylon too!

1848 – 100 years before Ceylon attained Independence. This was the year a new era was to begin against the white men of that time… and a journey through which a national hero was born!

Born on the 7th of November 1812 in Uyana in the coastal town of Moratuwa, this legendary was known by the name of Weerahennedige Weerabala Jayasuriya Patabendi Francisco Fernando. Kalistoru Fernando, a businessman and Madam Helena were his parents.

Francisco Fernando who inherited a valiant handsome figure from his young age was a brave personality who withstood unjust. He was a rebellious and mischievous boy but was always compassionate towards the poor, the weak and the oppressed from a very young age. At the age of 13, he had a clash with the village headman of Lakshapathiya, a petty tyrant and Francisco thrashed this man on one occasion and stoned him on another. Realizing that he could be in trouble with the authorities, Francisco went to his uncle’s home in Ratnapura named Marcellenus Fernando, who was a famous Sinhalese proctor in 1825. While in Ratnapura till about 1840, Francisco had begun to be known as Purancisco or Puran Appo (Puran Appu). The name ‘Appo’ was a respectable name in Ratnapura.

From there he went on to move into the Uva province and worked at Haldumulla. There his generous nature and empathy for the common man soon attracted a number of friends and admirers. During this time, he also came to know many English planters and soldiers. But he did not like their ways.

Between the years of 1842 and 1844, he became famous as a fearless person in the Uva province.

Along the years that passed, he got into another brawl with a British official over his treatment of the poor. He appealed on behalf of a poor villager to a Police Magistrate named Dawson of Badulla, who, however, rejected his petition. In outraged vengeance, Puran Appu broke into the House of Magistrate Dawson and was eventually imprisoned. However, he staged a dramatic escape and along with himself he had released all of the other prisoners too. He was subsequently caught again and yet again he had escaped. This time the government branded him an ‘escaped convict’ and proclaimed him an ‘outlaw’.

It was at this point of his career that he led a band of outlaws and initiated a reign of terror against English planters and officials in Uva, much to the delight of the people. His daring exploits against the white men soon made him a legendary hero in the tradition of Robin Hood and Wat Tyler.

He was now convinced of the necessity to free the country from the British Rule in order to liberate the people from the hardships and humiliations that they suffered under the foreign invasion. With this end in view, he conferred with the Sangha of Mahiyangana and Muthiyangana who pledged him their support in 1845.

On the 1st of January 1847, a gazette notification was published by the Colonial Secretary, Sir James Emerson Tennent with a reward on his head and a description of him as:

Early in the same year 1847, he met and married a girl from the highlands named Bandara Menike, the daughter of Gunnepana Arachchi from Harispattuwa in Kandy and they had a daughter named Siribara Menike.

By the time Puran Appu came to Kandy, the Kandyan province had been in a state of mayhem. By now, the province had been under British rule for 32 years. An economic depression in the United Kingdom was severely affecting the local coffee and cinnamon industry. Planters and merchants hollered for a reduction of the already existing export duties. Instead a new proposal was accepted to radically shift from indirect taxation to direct taxation. It was decided to eradicate the export duty on coffee and reduce the export duty on cinnamon leaving a budget deficit which was to be met by direct taxes on the people.

On the 1st of July, 1848, under the governance of Lord Torrington, a new and inexperienced governor, new taxes were imposed on guns, dogs, bullock carts, carriages, shops, verandahs, boats and labour was made compulsory on plantations roads, unless a special tax was paid. The most hated of all taxes was the road or poll tax. Even Buddhist monks were not exempted from the road tax. These taxes fell heavily upon the Kandyan villagers as it affected not only on the purse but also on the traditions. The headman of the time was told by Sir Tennent:

“Pay two and six and keep a gun or be flogged”

Amidst the turmoil, a mass movement against the oppressive taxes was developing. The masses were without the leadership of their native King (The last Kandyan King – Sri Vikrama Rajasinha who was deposed in 1815 by the Kandyan Convention) or their chiefs (A high-ranking official under the last kandyan king – Keppetipola Disawe) who were beheaded after the Uva Rebellion.

Hence, the leadership in the Kandyan provinces passed for the first time into the hands of ordinary people.

After three weeks of preparation in the early hours of 28th July 1848, a crowd of eight to ten thousand men under Puran Appu’s leadership armed with guns, spears and knives set off for Kandy from Dambulla – where the consecration ceremony had taken place. The rebellion was led by leaders such as Gongalegoda Banda, Dines, Dingi Rala and Puran Appu who were supported by the people and the village headmen of Matale. The plan was for Puran Appu, Gongalagoda Banda and Dingirala to disperse into three different directions and then meet at Katugastota to proceed and attack Kandy on Sunday, 30th of July.

But, before they reached Kandy, Puran Appu’s army first attacked the British Fort – Fort McDowell in Matale. They attacked government buildings including the Matale Kachcheri and destroyed some of the tax records. Simultaneously, Dingi Rala instigated attacks in Kurunegala, where eight people were shot dead by the British army and Dingi rala was captured & hanged. However, Puran Appu was successful in capturing Matale and the people in another demonstration of popular fervor, proclaimed him as King of Kandy

Sadly, his success was short-lived.

On 29 July 1848, Martial Law was declared in Kandy. Half-way between Matale and Kandy, the Sinhala forces, depleted by desertions and their movements betrayed by traitors for rewards, were intercepted by the British troops and attacked the rebels’ stronghold on the Wariyapola Estate, massacring the ill-trained army and subsequently recaptured and occupied Matale’s administrative centre.

A stone memorial “The rebels were dispersed here” stands on the Matale-Kandy road till this day.

Lillie Monument On the Road Side

Puran Appu himself was captured on his way and taken to Kandy, while Gongalegoda Banda and his elder brother Dines had escaped and gone into hiding. With the capture of Puran Appu, the Rebellion fizzled out.

He was brought before the Court Martial and was found guilty of having waged war against H.M. Queen Victoria and was condemned to be shot.

On 8th of August 1848, on the banks of Bogambara Wewa, Veera Puran Appu bravely faced his execution by the British Rifle-Squad. Breathing his rebelliousness to the last, he paid the supreme sacrifice for his country and his people.

Puran Appu was a leader who stood up against the might of the British Empire. He proved that the unity of our people along with proper and courageous leadership would be the basis to face any crisis.

Soon, a warrant was issued on Gongalegoda Banda for his arrest and a reward of 150 pounds to be given to anyone who gave information of his whereabouts. On 21 September 1848, Gongalegoda Banda was captured by the British and banished to Malacca (now Malaysia) where he had died in December 1849.

The best tribute to Puran Appu was paid by his enemies.

Governor Torrington wrote to the Colonial Secretary, Earl Grey, around a year later in 1849 as below:

“I remind you of the last words of Puran Appu. He held up his hand and said, ‘if there had been half a dozen such men as me to lead there would not be a white man living in the Kandyan Provinces’.

If there had been such leaders, without doubt for a time we should have lost the country.”

James De Alwis wrote in 1876 in the ‘Ceylon Over-land Examiner’ that Puran Appu was of a Karava Caste who had “a bold and daring disposition combined with a strong and healthy constitution.”

Subsequent to assassination of Puran Appu, British rulers had taken measures to grant several concessions to people. Thereafter, the attitude and the cruel dictatorship of the British in Ceylon gradually took a different turn and changed to a government more favorable to the public.

The change was due to the dedication and sacrifice of Veera Puran Appu. Repression gave way to welfare schemes and 100 years later Ceylon attained full independence and went on to become Sri Lanka!

That is why the name of Veera Puran Appu, a heroic son of Mother Sri Lanka is enduring to this date. 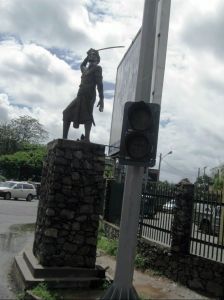 The Only Remains of Fort MacDowell